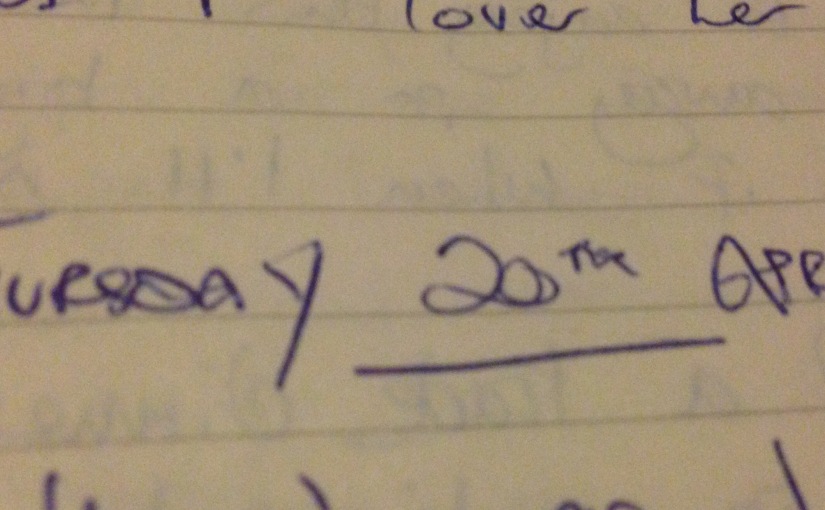 The first script of mine that ever got any serious industry attention, and made me any kind of money, was a ghost story called WAITING FOR EDDIE. I’d originally written it as a one-act play which I had staged at the Leatherhead Drama Festival the previous year.

The premise is that Eddie has been killed by his girlfriend Sam and comes back as a ghost to torment her and find out why she murdered him. Meanwhile, poor Sam is coming to terms with having committed such a terrible crime, and then not only does she have to deal with her boyfriend’s ghost, but has to put up with his ex suddenly turning up on her doorstep.

It was a nicely twisted black comedy on the stage, and I thought it would translate well onto film, and my script agent got it into the hands of a producer called Dean Fisher whose company Scanner-Rhodes optioned it for the princely sum of £100 (£85 to me after agent’s commission). My first ever money earned as a screenwriter… eventually. As you’ll see from my snarky note below, the cheque took some time getting to me, apparently lingering at the bottom of an agent’s in-tray for several months.

Dean was one of my early mentors in the world of film. He’s very adept at producing low-budget movies that have a targeted market, with international appeal, that make money for their investors through EIS schemes, a crucial business initiative for any independent filmmaker. He felt that WAITING FOR EDDIE could work as a low-budget horror, and his enthusiasm and encouragement got me through many a rewrite and improved the script immensely, moving it on from its stage roots and making it properly cinematic.

There’s some light editing here, and some names have been redacted to protect the innocent (mainly my agents), and for the first time in these diaries you’ll see mentions of my wife Claire (who starred as Sam in the original stage production) and my friend and fellow writer Steve Mayhew…

Script agent emailed me today and told me that my book agent has had my WAITING FOR EDDIE money since November… it’s only £85, but it doesn’t instil me with much confidence.

Got an email from Dean Fisher at Scanner Rhodes to tell me that he’s taking WFE to Cannes to find funding. That’s bloody script’s better travelled than me!

I had a proper read of the Scanner-Rhodes business plan. It’s incredibly thorough. 56 pages long and minutely detailed (down to the £120 they’re going to spend on stationery), but the basic gist is; invest in four films over five years, then the company will be wound-up and everyone gets their money. But, for me, the most exciting and important bit was the production timetable. If everything goes to plan WAITING FOR EDDIE will be in cinemas Summer 2008!

I can already see the trailer and Claire is picking out a frock for the premiere. But, in an email exchange with Steve, we decided the best thing would be to enjoy this moment and then file it all away in a big box marked ‘I’ll believe it when I see it.’

Well, it’s not much of a spoiler to say that it’s still in that box, gathering dust in the attic of my mind with a bunch of other unmade scripts. But my script had been optioned! I had earned some money (eventually)! And for the first time I felt like I could actually call myself a writer. I know that getting paid for writing shouldn’t be the be-all and end-all of writing, but it did put a smile on my face and a skip in my step.

And the process of developing that script over the next year or so taught me an incredible amount and put me in touch with some amazing people, not least a film director who had some very cool short films to his name and was hoping to make his breakthrough feature debut… Mr. Jon Wright.

Stay tuned for another thrilling instalment…!