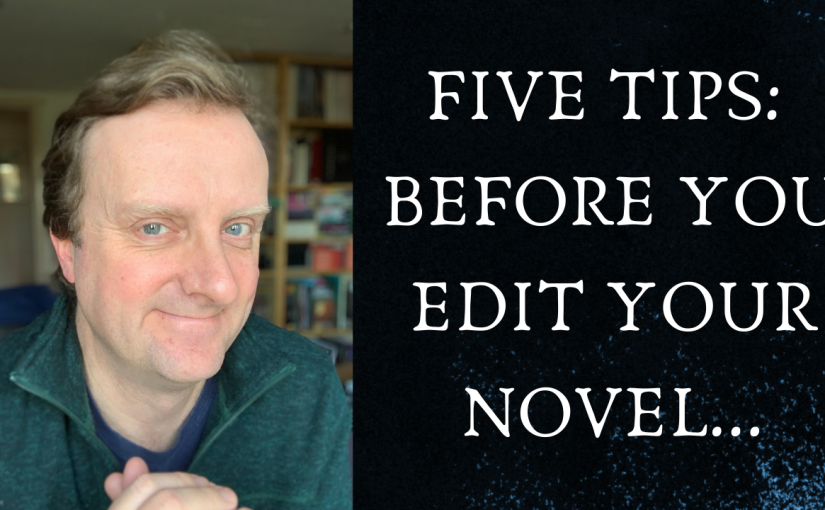 I’ve got the notes from my editor on my manuscript. Now what? After a week of avoiding my edits, it’s time to knuckle down. Here are five quick tips to help you sort through editor notes before you start your next draft…

Hello folks, about a week ago, I put up a video talking about how I just got my edit notes from my editor, Bethan at Simon & Schuster, for the next book in the Witches of Woodville series, the The Babes in the Wood book.
And if you were watching that video, you might think, oh, he’s got his notes. And we talked a bit about things like the edit triage and and, you know, just looking at headlines, bullet points
and making notes and stuff like that. And you’d be perfectly forgiven for thinking that immediately upon me, you know, finishing that video, I would jump straight into the edit. So what have I been up to since then? Procrastination, mainly, we can talk about procrastination, if you like,
maybe later. But, actually to be fair, I have had a couple of rewrites on two short stories and also some light rewriting on a horror movie which essentially took all week. So, you know, I’ve been doing that. I think, to be honest, it is a good thing not to jump in with both feet. As soon as you get your edit notes, you know those ideas, you know, you read and review those notes that your editor has sent you. Let them simmer in your brain, gain some acceptance from that time. Procrastinating.
That’s my excuse. And I’m sticking to it, During the meanwhilst, here are five tips on the first things to do before you start your edit…

Save a copy.
Seriously, save it. The original one that your editor sent you. Save it, file it away, leave it untouched. Don’t change anything because there will come a point in the edit where you’ll come across something and you think, oh, what did my editor say about that? And you won’t have any way of knowing…

Accept all changes.
I’m going to show a little video here. There’s a thing in Word and other similar word processors called “track changes” where the editor will turn that on and every single change that they
make comes up as a change. And you have a choice to accept or reject that change. Frankly, when it comes to the punctuation and grammar changes, there will be hundreds of them. Just “accept all”, you know, there’ll be a way of doing that easily on your bit of software. Google it. You’ll find a YouTube video that will tell you how to do that just “accept all” because frankly, they know their
punctuation and grammar. Just accept it.
They may make changes to a sentence or may make changes to a particular word. A good editor will leave a note saying, “I’ve changed this… Is that OK?” Or “Does this make more sense?” And, you know, you can maybe go back to your original document, which you will have saved, and have a look and see if that change is harmful or gratuitous in some way. But frankly, in my experience, they don’t make any crucial difference. These these are words that, you know, just there for clarity… Changes
are just there for the reader. This draft is not for you. It is for the reader. Hence, all drafts from now will be for the reader as well. Just ask yourself, “Is this a hill I’m willing to die on?”
Because in my experience, by the time you got round to the copy edit and the proof edit you’re kind of… You can’t even remember what that word was anyway, so just accept all changes.

So after that, you’ll be left with the comments. I’ve got about three hundred and thirty comments left on my document now from down from five hundred something. Go through those comments, read, make notes, reply to yourself, you know, make quick fixes if you want. Sometimes, you know, you’ll have duplicated word in a sentence or a paragraph and they’re pretty easy to fix. But don’t be tempted to make any big changes yet. Wait till you get to the end, because sometimes editors will see something that bumps them out of the story, make a comment about it, suggest changing it, and then later on, when they get to the end, they realised that was actually part of a plot twist all along. So don’t change it because it may be something that just needs a little bit of clarification or might be fine, just as it is. So read the comments, make notes.

Don’t just focus on the criticism. Look at the praise, too, because a good editor will leave you praise. It’s called the praise sandwich. It’s like, “This works.” “This is a bit rubbish.” “This is wonderful.” Fragile egos of writers strikes again. But actually praise is really helpful because it tells you what’s working. Lean into that when you rewrite.

And don’t feel you need to reply to the editor’s comments. You know, sometimes they’re just posing a question just to prompt a thought from you. You know, they’ll say, is this really necessary? Do you really… Does this make sense? Did they really do that back then? So the editor isn’t necessarily asking for a reply when you send back the next draft, although if you feel you would just want to clarify a point, that’s fine. But it’s usually a good sign that it’s something that’s bumped them out of the story. Might need a quick fix. So think of it that way.

So, folks, five tips. I think that was five. Pretty sure it’s five… Five tips for when you start your edit. I hope that was useful. If it was, give us a thumbs up, leave a comment. All that jazz. Share with writing groups, all that good stuff. If you’ve got any comments pop them below and I will reply. Stay tuned for some goodnews coming about the next book. Some cool news coming on Friday (cover reveal). So, yeah, stay tuned for that. And in the meantime, happy writing.