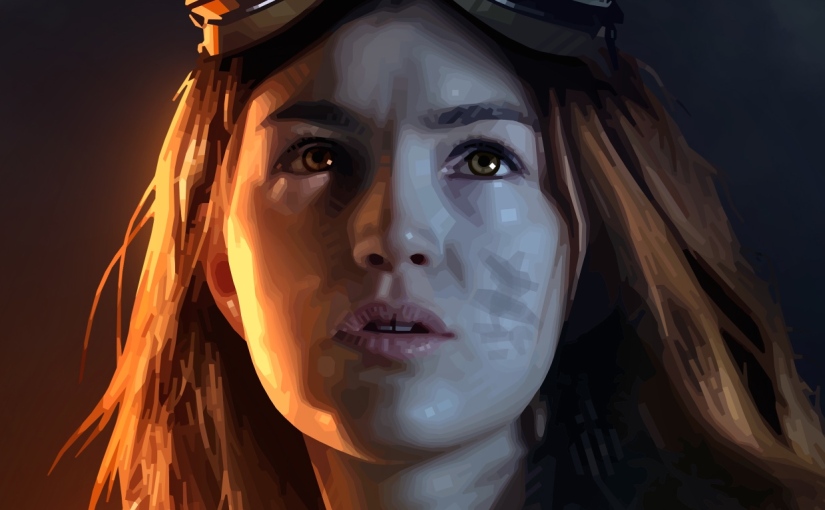 Feast your eyes on this (clicken to embiggen)…

The Black Spitfire is a script project that Paddy Eason and I have been working on for a couple of years now. Here’s our logline…

May, 1940: Headstrong young pilot Ginny Albion crashes in France as the Nazi Blitzkrieg sweeps across the country. Her passenger is Winston Churchill, and the fate of the world is in her hands.

Who could resist that, eh?

It’s a spec script – meaning that it’s not been commissioned by any entity – and we’re doing this in the hope that a producer or director will take it under their wing and make it fly (apologies for the abundance of flying metaphors throughout this post).

Spec scripts are nigh-on impossible to get off the ground these days: the studios are more interested in building on their existing brands, and anything original is branded as “untested”, putting the fear of God into those clutching to the studio purse strings.

But we’ve had a fantastic response from those who have read the script, and we’ve already met with a few eager producers. It’s still early days, but Paddy and I commissioned artist Brian Taylor to put together a poster concept (these things help when you’re pitching to producers and directors) and he blew our minds with the results, perfectly capturing the adventurous spirit of the film and our heroine Ginny Albion. Our model was actress Claire Garvey, who gamely posed for photos as I wafted slabs of polystyrene at her to make her hair billow (no budget for a wind machine, sadly) as Paddy snapped the pics.

If you’re in the industry and want to read the script, it’s over on the Black List, if you want the latest news do please follow us on Twitter @GinnyAlbion, and if you’re a producer with, say, £30 million handy, we’d like to buy you lunch.

We hope you like it, and we hope to see Ginny in action at the movies soon.

UPDATE: We’ve had some great reviews over at the Black List. Here are a few choice quotes…

“What a terrific read! The script starts off with a bang and our brilliant Ginny anchors a wonderful story about courage, self-actualization, love, and friendship. As our charming heroine, Ginny is flawed but never lacking in gumption or charisma. She leaps off the page and lights up an otherwise monotonous time period. Her rapport with Kit is absolutely darling, and the friendship that develops between her and Churchill is deftly written. Churchill himself is captured beautifully – from the wry commentary on his unlikely guide to the humor that arises from his verbosity, he’s all there and with a pout to boot. Although at times the narrative feels a bit predictable, it’s a delight to read. Tonally, it’s similar to INDIANA JONES, but this time we get a kickass female protagonist. Overall, a well structured story with engaging, dynamic characters, a commercial tone, and strong dialogue.”

“A great piece of writing and a killer idea, demonstrating excellent world building and character work… it’s a fantastic read and at the very least, the writers should have no problem getting hired off of this.”

“This script is rooted first and foremost in a strong and engaging lead with Ginny… She’s brave, funny, and moody all at once. She’s compelling to follow. The action is also quite exciting throughout. It’s cleanly written and easy to envision from what’s on the page. Later on, Ginny saves a number of Allied prisoners from German executioners at the last moment. It’s tense and fun all at once. Ginny’s relationship to Churchill is also cannily drawn and entertaining. The two bicker and fight and like each other. At one point, he excoriates her for radioing details to the enemy in a panic, and they argue and she shoves him down. He then stomps off in the middle of a war. It’s memorable and gives the piece a good sense of personality.”

“This is an invigorating and original concept that is sure to catch the attention of industry readers. The dialogue stands out as the major macro strength to the project as it’s upbeat, quick and natural throughout. The banter between Ginny and Churchill is funny a lot of the time, but in a very grounded way — especially after they land. It adds a comedic relief, that is extremely dry and grounded… Churchill’s voice and character development overall is fantastic and will prove to be captivating for readers as his dialogue is accurate to portray his place in history, but shown in an exciting way. One of the coolest things about his character is the standard he holds Ginny to the entire time, but also how he begins to trust her and respect her more and more as they continue on and it’s a fantastic moment when she holds the knife to his throat… physically and emotionally. Ginny’s character gets comfortable around Churchill as well and it’s tracked nicely alongside her growth as a character. It’s very triumphant in the end when Winston’s calling out for Ginny over the radio and along with being extremely cinematic it ties up their story well for the audience.” 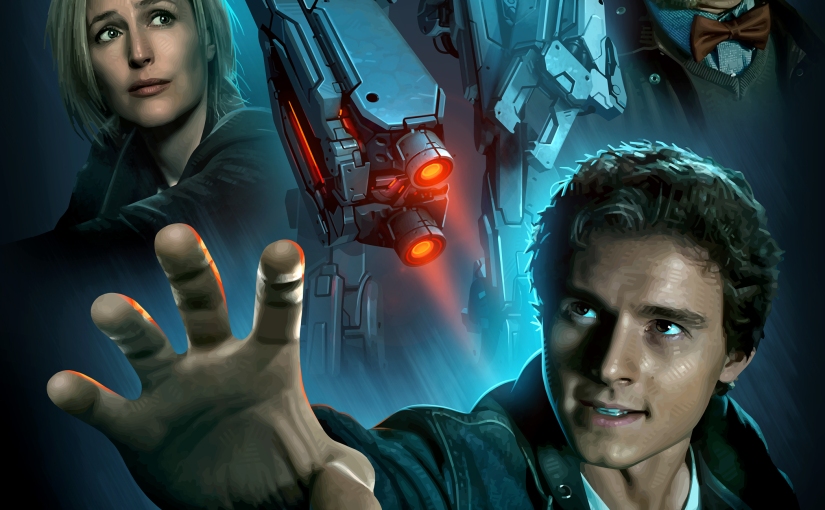 Today those good folk over at Empire Online revealed the wonderful collectors’ poster for ROBOT OVERLORDS. Feast your eyes on that (and give it a click to enlarginate to its full size)…

I just love its ’80s Drew Struzan-y quality. Jon and I wanted to capture the feel of those classic Amblin movies with our story and this poster does exactly that. The artist is Brian Taylor, also known as Candy Killer and a quick perusal of his website shows that we’re in very good company, with his outstanding artwork for classics such as ALIEN, ALIENS, BLADE RUNNER and THE THING.*

Brian confirmed that copies of our poster will be available for sale nearer the time of the film’s release early next year and that there may even be signed copies available. I, for one, will be front of the queue for that!

And, to celebrate all this Robot-y goodness, those lovely people at Gollancz suggested that we run a competition to give away a signed copy of the proof (or “galley” if you’re from the colonies) of the novelisation to one lucky winner. Only a few of these were printed, mainly for the film’s producers when attending film festivals and the like, so these are properly rare. So if you fancy your chances, pop over to the Gollancz blog and have a go! The competition closes on 21st December 2014.

*And if you’re looking to buy me a Christmas pressie, I’ll have the Blade Runner print please! Oh, all right then, if you insist, one of each…