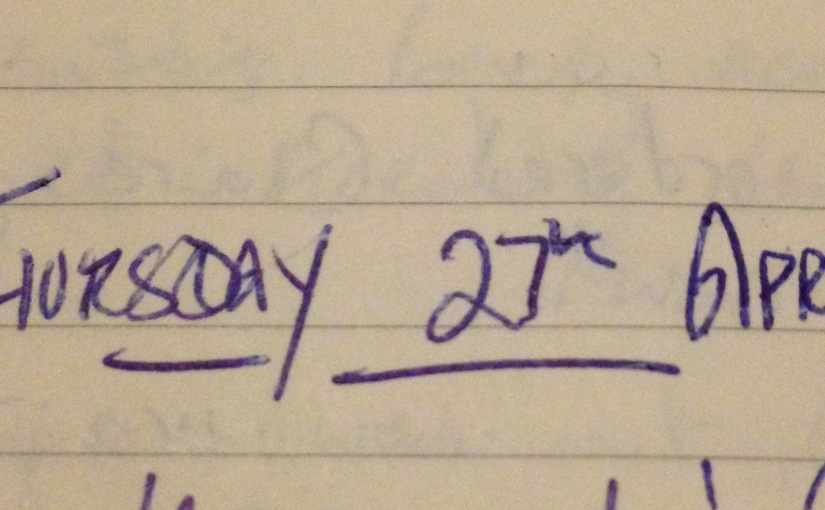 My day job is with the wonderful Orion Publishing Group in the sales department. I’ve been there since 2003 and through work have met some remarkable people. Indeed one of the reasons I started keeping a diary was because with my feeble mind for names I was losing track of some of them and it’s always handy to look back and double check.

I’m always meeting authors and agents, but ten years ago it was fairly unusual for me to meet anyone from the film world, and I’m afraid that when a film or TV producer entered the building it would take every ounce of what little professionalism I had to stop myself from pouncing on them, yelling “READ MY SCRIPT! GIVE ME MONEY! I WANT TO MAKE STAR WARS!”

However, as you’ll see, on this occasion I had an in: I knew someone who knew these people… My friend Simon worked as an editor in the same building as them… once… ages ago… Well, it was better than nothing.

Ian Sharples and Rod Brown, the producers of the forthcoming TV version of THE HOGFATHER came in today. Their director is Vadim Jean and they all remember working in the same building as Simon in Wandsworth (I should point out that Vadim wasn’t there today – he was asleep after a night shoot). They remembered Simon fondly. I had to mention my near-miss with Vadim many years ago. I suppose I was 17 (just after he released LEON THE PIG FARMER). Simon gave me Vadim’s details and I sent him my CV begging for work as only an actor can… and Vadim called me back!

Except I was out.

Dad took the call, and the number, and for some idiotic reason I never called Vadim back.

Still, I got both Ian and Rod’s details and gave my script THE LAST TIME MACHINE a hearty plug!

The idiotic reason for not calling Vadim…? Shyness? Lack of confidence? A feeling that I wasn’t ready? God knows. I wouldn’t hesitate today. And having had a few writers ask me for advice (me?? Yes, really) I’ve been only too happy to dole out what guidance I can, and I’m sure Vadim would have too.

If you’re an aspiring writer and you have questions and you find yourself offered an opportunity to ask for advice, take it! Be polite, don’t outstay your welcome, but don’t be frightened. And if you meet producers or directors and have something to pitch, then choose your moment carefully. There’s nothing worse than some writer derailing a conversation with an ill-timed pitch (like I did here). Ask for the best way to get in touch, or if it’s possible to get a meeting. That way everyone can relax and you get to pitch to someone who’s receptive to your ideas, and not defensive like cornered prey.

I do meet Vadim again one day, but that comes in a future instalment of this diary…