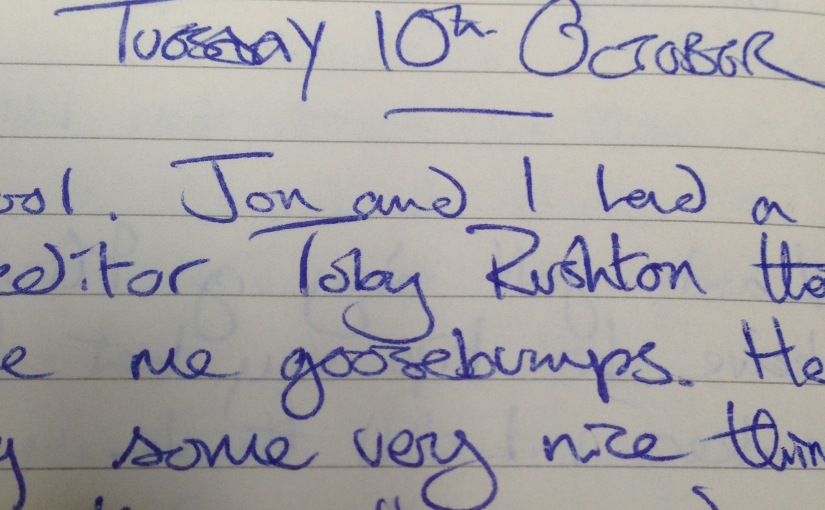 Ten years ago, my horror-comedy script Waiting For Eddie had a producer, a director and had been chosen for the first ever Film London Microwave scheme, which was designed to produce at least two debut films with a budget of £100k. And day two saw the script get some serious interrogation from some industry professionals. Would it be knocked out in the first round, or would it pick itself up, battered and bruised, and ask for more…?

Day two of Microschool. Jon (Wright) and I had a meeting with script editor Toby Rushton that was so good it gave me goosebumps. He started by saying some very nice things about the script, we then all agreed on some of the problems. He liked the suggestion in the script that the house has something to do with its murderous history. Jon and I were initially wary: we didn’t want to go down the Amityville Horror route, but then I latched on to the slaughtered Victorian family in the Fleetwood sequence and we now have a new character called Cassandra and an ending that is ten times better.

Poor Dean (Fisher) was stuck in the basement at the Institute Francais, poring over the budget with all the other producers. He’s still wary of making of making Eddie for £100k, but Jon is more optimistic.

This was the first time the script had been read by anyone not directly associated with the film, and it was something of a relief to be told that it wasn’t a steaming turd, and how dare I call myself a writer? I remember the goosebumps came when Toby took a tiny part of the script — a throwaway line about previous murders in this haunted house — and started talking about how we could extrapolate that into something bigger, and by the time our session was over we had a new character and a better ending (and I had a ton of revisions ahead of me… years of them, in fact).

Getting feedback and notes can be a traumatic experience, but this was such a thrill to be given permission almost to dig deeper and explore these characters and situations all the more. At the end of day two I was certain of one thing: our film would get the £100k and would be made within the year (spoiler alert: nah).

For more on Day Three of Microschool, tune in tomorrow!