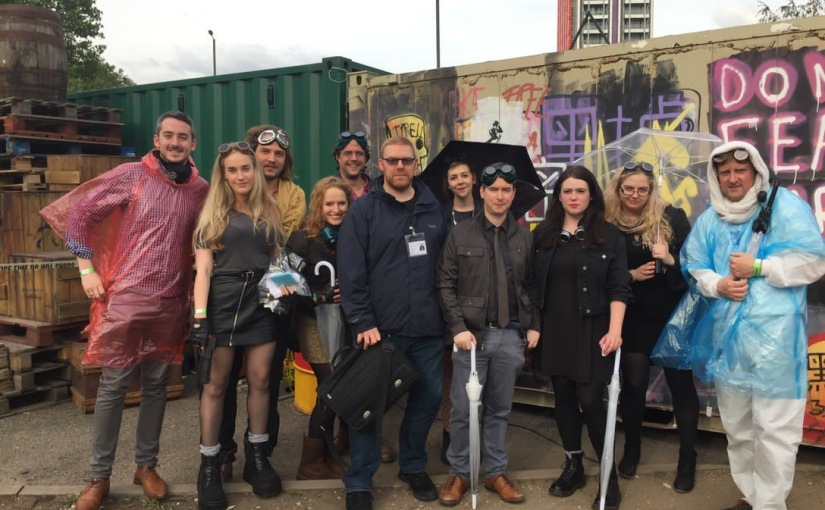 I was lucky enough to be invited by the Gollancz gang (pictured above – photo courtesy of Kate Williams) to the latest Secret Cinema immersive experience, and this one was based on one of my favourite films, Blade Runner. I had been tempted by Secret Cinema in the past – particularly the Star Wars one last year – but the expense and commitment to costume and character was always offputting. But, as a guest of Gollancz, there was no way I could refuse the opportunity.

For the uninitiated, Secret Cinema offers an interactive evening where you essentially become part of the film. An extra in the movie’s universe. And it begins from the moment you sign up. They email you with the name of the character you’ll be playing and your role in the greater story. You’re given instructions on how to dress and a selection of props to bring. I was Nathaniel Woodville (spooky, as I went to a school called Woodville and the name ties into one of my forthcoming books). I was scavenger and chose to bring photos (precious currency in the Blade Runner universe), and an umbrella. I wore a paper suit, covered with a plastic poncho, decorated with fairy lights borrowed from my daughter, and topped off with my wife’s snood and some goggles. It cost about thirty quid in total and I have to say I looked rather fetching… 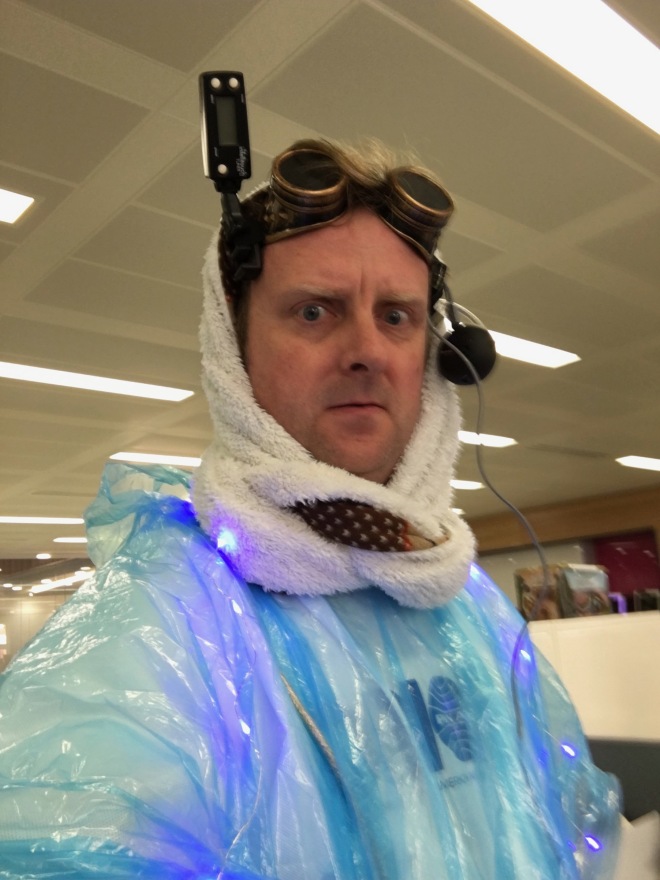 From the moment you arrive, the immersive experience begins. We were abused by the LAPD outside the venue (a warehouse near Canning Town tube), the security bag checkers inside, and the ticket inspectors. They tore up my ID and stole one of my photos! It was clear that we were scavengers. The lowest of the low.

This is where you have to make a choice. Sit back and enjoy the silliness and retain your own identity, or go full method and immerse yourself in your character. Well, I bloody went for it, dodgy American accent and all. I gripped by umbrella with both hands, shuffled aroud, hunched up and twitchy as Nathaniel Woodville. Poor Nathaniel had been ground down by the system and he just wanted to get offworld. I was into it, exercising acting muscles that had been dormant for some time and loving it.

Once inside, we became embroiled in a mission to overthrow the powers-that-be and create a blackout. We had to go to Taffy’s bar and find a singer called Luna. She gave us a photo to deliver, and a message to pass on, but we were busted by the LAPD and thrown into a cage. Then I was singled out and interrogated by the cops. They were led by an actor who kept the scene on track with the story, but all the dialogue was improvised. They wanted to know why I had been speaking to Luna, and I told them I was a fan. “Then sing one of her songs…” So I then started a nervous rendition of “One more kiss, dear” from the film’s soundtrack. That seemed to help things and I continued to deny everything. Then, after bribing the cops with two photos, I was set free… But they were tailing me and I had to lose them by doubling back, scurrying into a crowd and turning my fairy lights off. This was thrilling stuff.

I sort of lost track of the story at that point, but by then I was already immersed in the world. All around me were sights and sounds familiar from the movie: ads for off-world colonies, sweeping searchlights, and a rain machine that doused Chinatown in “acid rain”. The sets were incredible: Taffy’s bar, the police station, and various eateries were all pretty faithful facsimiles of the film’s originals.

The anticipation to the promised blackout was building and we poor, oppressed scavengers began to gather in the main square, dancing in unison, raising our umbrellas in protest and getting absolutely drenched. I never went raving in my youth, but I imagine it must have felt something like this: a crowd chanting and moving as one, and thinking that anything was possible.

Once the story was over we were directed to the three movies screens where we watched the Final Cut of the film. This for me was the least successful part of the evening. The sound and picture wasn’t the best I’ve ever seen, the crowd was restless, a few were inebriated, many got up for drinks, stomping up and down the metallic seating.

Actors moved about in front of the screens and the scaffolding during key scenes, miming the dialogue – erstaz Roy Battys and Rick Deckards… It didn’t really work for me. Stage acting and film acting are two different disciplines and it all seemed a bit silly and unnecessary after what we had just been through. The flashes of lightning and red pulsing lights as the spinners flew over the Tyrell Corp buildings were much better at building the atmosphere, but it was pale in comparison to the intensity of the main event.

I had a long journey home, and lost patience with the boozed-up chatterers behind us, so I left about an hour into the film, returned to my locker, got out of my costume and put on some dry clothing. Then came the strangest bit of the evening… returning to the real world, walking through Canning Street tube station knowing that if I tried to interact with any of the real people in the same way that I had interacted with my fellow Secret Cinemagoers, they would have veered away from me, called the police, or thumped me. Part of me wanted to turn around and go back in.

From talking to friends who have been to a few of these, the Blade Runner Secret Cinema had the most successful version of the interactive element. My scavenger story was competing with the cops’ stories, with the replicants’ stories, and yet it all came to a head with a transformative moment where, for a moment, lost in time, we were all in the Los Angeles of 2019, seeing things that you people would never believe…