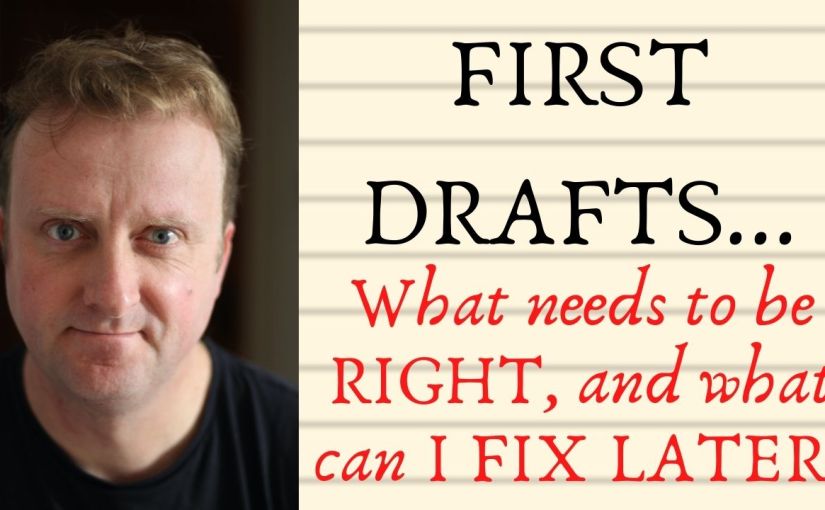 Is it okay if the first draft of your novel or screenplay is a little rough? I like to think so. Here are few tips that will help you get to the end of a messy first draft, not least the one thing you should try and get right first time…

Hello, folks, when writing a first draft, is it OK if it’s, well… a little rough? I’ll be honest with you, I don’t know how to do it any other way. My first drafts are rough as sandpaper. And long ago I came to terms with the fact that I’ll probably rewrite a novel or script at least three, four or five times before it’s anything like as good as it needs to be. If this sounds like you, then rest assured you are not alone.

In over three hundred episodes of the Bestseller Experiment podcast, I’ve interviewed two, maybe three authors who are happy with their first drafts. The rest of us have to put up with the poor, wretched Frankenstein’s monsters that we will create out of pain and suffering. Here’s a question: with the first draft, what needs to be right and what can be fixed later? Well, what needs to be right? Well, none of it, really. I mean, it can be a complete disaster.

There’s a reason that first drafts are called — and apologies if you’re eating — first drafts are sometimes called vomit drafts. So please don’t overburden your first draft with your expectations. Nobody’s first draft will read like a published novel. The sooner you accept this, the more liberating it will be for your writing. I mean, I still stop myself and fix typos as I go, which is one of the reasons I’m writing more and more by hand, actually, because I scrub it out.

But if you can just burn through, and not look back, the chances of you finishing that first draft increase exponentially. You might be big outliner, but don’t feel that you need to slavishly stick to an outline, as that can create all sorts of problems, not least shoehorning your protagonist into situations simply because the Hero’s Journey or Save the Cat says so. Permit yourself the flexibility to change your story when writing. Be open to the story opportunities that will emerge as you get to know your characters.

So I’m currently working through my first draft of my next book now, and there are things that change and evolve in the characters in the story. And the temptation to go back and fix them now is really overwhelming. But… experience tells me that’s a rabbit hole that creates more problems than it solves. If you start tinkering with stuff back there, then you start second guessing stuff that you haven’t written yet, and you end up being dragged into a swirling vortex of despair.

And no one needs that. Not these days, especially. I simply leave myself a little note in the comments and I’ll focus on fixing it in the next draft, because my priority is to finish this first draft, because nothing is more important at this stage than finishing a draft. I can make fixes on the next pass to the one after that or the one after that.

Or… You get the idea. However, if you want to concentrate on one thing and get that right first time round, make it your protagonist. Your entire story hinges on their journey. So if you haven’t figured out what they want and how the journey would change them, then maybe take a second to suss that out. Start with the simple stuff. How do they start the story and how they change by the end? Some of you out there will have heard me say this a million times before, and I’m quoting screenwriter Craig Mazin here.

But if you can figure out how your protagonist goes from “this” to “the opposite of this”, then you have the through line and central dramatic argument of your story.

Now, of course, there are authors out there who write painstaking first drafts that are as good as ready for publication, but they are rare as hen’s teeth. So if you think your first draft is ace. Fantastic. Good for you. But please don’t be discouraged if you feel your first draft is lacking. I think 90 percent of writers out there will be with you in solidarity. You are not alone. I hope that was helpful. Happy writing. See you again soon.