Hi everyone – the three-quarters funded marker is just a couple of pledges away and it’s kind of crept up on me. Again, massive thanks to everyone who’s pledged so far, and do please continue to spread the word (send them here!). In the meantime, here’s a little quiz you can share with anyone who’s not yet pledged… 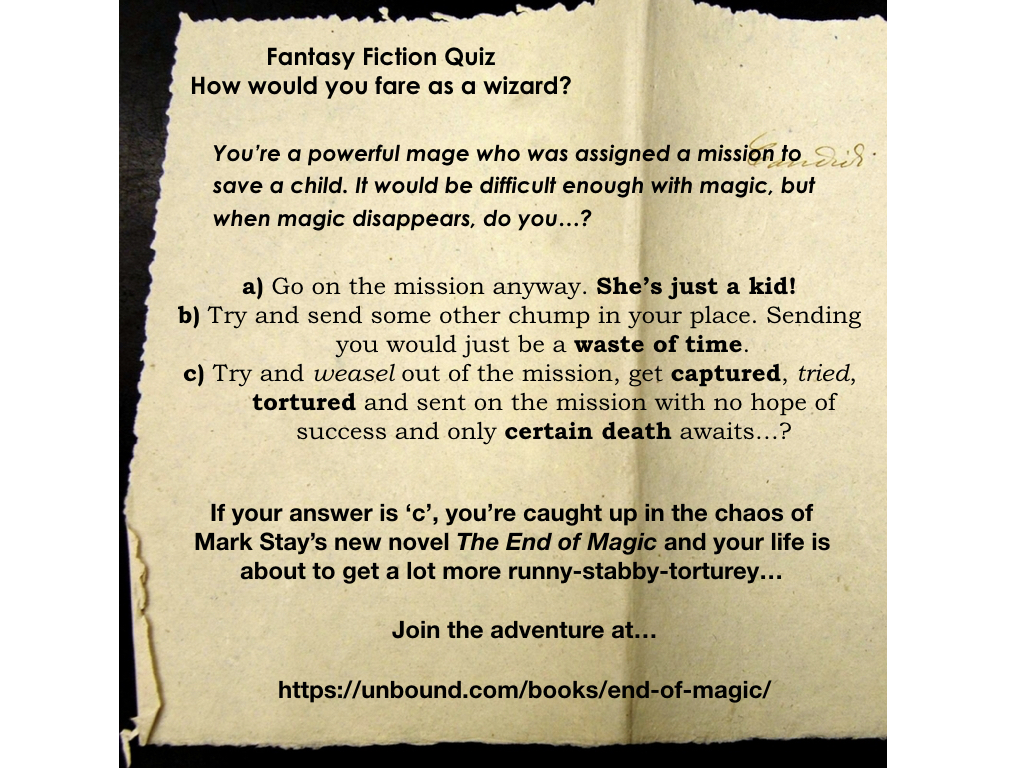 Big love and thanks to all new backers of THE END OF MAGIC this week. We’re up to 68% and it would be great to make 70% by the end of the week.

It was great to see some of the 5-pack bundles get pledges… I bought a 5-pack myself last week to get copies of the book for a few friends who aren’t fans of the internet (and after the news these past few weeks you can hardly blame them!).

If you know someone who loves a bit of fantasy but doesn’t relish the idea of shopping online then do please ask them to drop me a line here and I’ll do everything I can to help. Until next week, here are some choice words from the book… 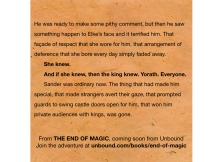 This morning I was delighted to discover that we’ve hit 42% funded, with 93 wonderful, beautiful backers!

42, of course, is the answer to the question of Life, the Universe and Everything as featured in the Hitchhikers’ Guide to the Galaxy (definitely my Desert Island Discs book), and so I’m doubly happy. I’m still hitting my 1% per day target, and it would be great to hit 50% this time next week.

I’m still finding that personalised emails and messages are the best way to get responses and pledges, but my address book will inevitable run out at some point, so I’ve started experimenting with some social media ideas to get the word out there…

And here’s a link if you’ve not pledged yet: https://unbound.com/books/end-of-magic/

Really happy to have spoken to Jen Williams on the Bestseller Experiment podcast this week. Not only is she an award-winning fantasy author and founder of the Super-Relaxed Fantasy Club, but she’s a jolly nice human being, too. I’ve been a fan of her stuff for a while, but if you’ve not read her before then check out The Ninth Rain, which kicks off her latest series. I’m convinced she’s invented a new genre: GrimFun – you heard it here first…

In this episode you will discover…

Oh, and don’t forget to grab a copy of our book BACK TO REALITY now!

A bit of a legend on this week’s podcast. Just before Christmas I was lucky enough to grab an interview with fantasy titan Brandon Sanderson while he was on his UK tour for the truly mammoth Oathbringer.

I’ve seen Brandon at a few convention panels in the past, and he always gives thoughtful answers, and he has his own podcast – the excellent Writing Excuses – so I knew he would be a terrific guest. And this was one of the reasons we opened the questions to our Patreon supporters, who gave us some cracking queries for Brandon, and some of whom are currently freaking out on social media having heard his replies.

You can listen to the interview here.

Thanks to the wonderful Stevie Finnegan for finding time in Brandon’s busy schedule for us! 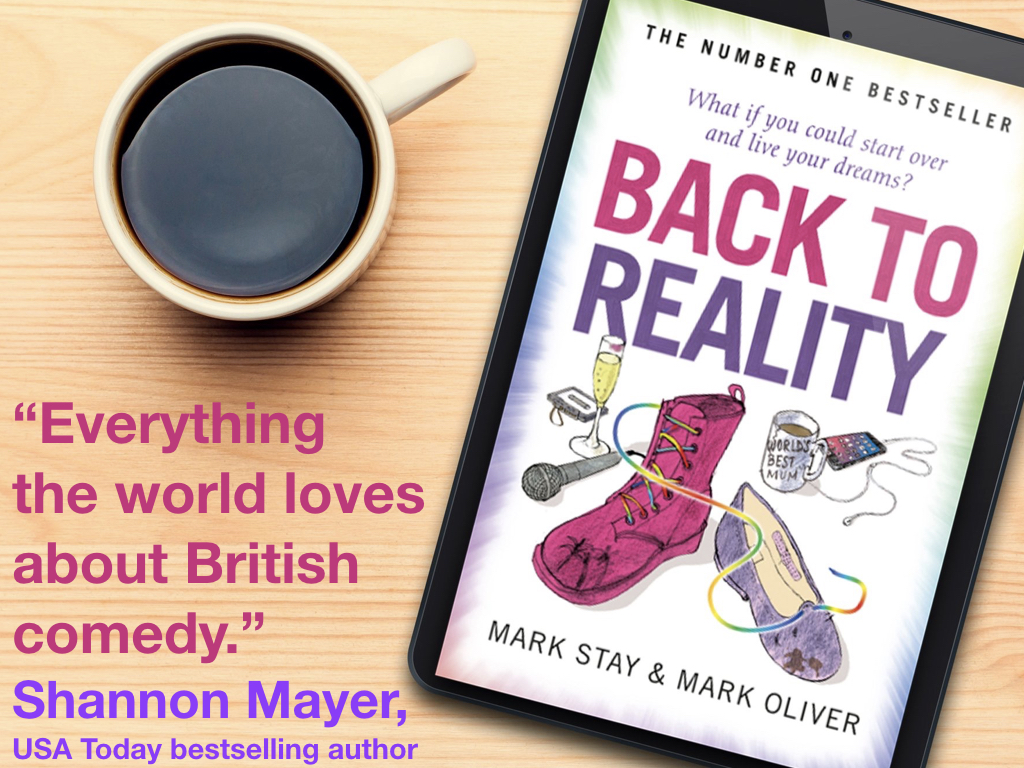 I remember getting an email from my colleague Simon Spanton some years ago. It was a simple message, ‘You’ll like this.’ Attached to the email was a file with the first few chapters of a book he wanted to buy for Gollancz called The Blade Itself. I opened the attachment and started to read.

He wasn’t wrong; the combination of black humour, violence and dental torture appealed to me very much. I wanted to read more and I’m happy to say that when we published The Blade Itself it was something of a hit (that was a golden summer for Gollancz debuts, also published were The Lies of Locke Lamora and Stormcaller – all belters).

I’m also happy to say that I’ve got to know Joe Abercrombie a bit over the years and should declare that before ploughing into this review of this latest THE RED COUNTRY. I’ll also do my best to keep this as spoiler-free as possible, but if you’d rather go in cold, then come back when you’ve read the book.

When Joe announced that his next book would be a Western, but still set in the same world as his previous books, I was excited and slightly worried. The Western genre is incredibly tricky to pull off, especially in literature. Even in the movies, you could count the really good Westerns of the last 20 years on one hand (Unforgiven, Assassination of Jesse James… and… er… that might be it).

But what Joe understands is that Westerns aren’t about Sheriffs, or shootouts, or John bloody Wayne, they’re about the frontier. The farthest reaches of civilisation where lawlessness is the norm, where the regular rules don’t apply and death is ever-present. And what he’s done is take some of his most interesting and complex characters, drop them at the very edge of his world, and let the chaos unfold.

There are some new characters; Shy is a woman with an outlaw past trying to reform her life on a farm. She’s one part Calamity Jane (the Deadwood version) and one part Marion Ravenwood (the Raiders version).

Temple is a classic Abercrombie coward; he wants to be a good man, he promises that next time he’ll make a stand, but every time he caves in and takes the easy option.

Lamb is Shy’s stepfather – described as ‘some kind of coward’, he too steps away from any kind of confrontation, and would rather be alone working in the fields than raise his fists.

And there are some old favourites, not least Nicomo Cosca, here playing a combination of Richard Harris in Unforgiven and General Custer. He even has his own biographer, scribbling his every utterance for posterity.

Oh, and of you watch the book’s teaser trailer you might just see something significant…

Did you see it? The fingers? Count ’em… Nine!

Shy’s little brother and sister are stolen and she and Lamb follow their trail to get them back. And as they’re led further and further west, you realise that this will be no breakneck chase. This story unfolds like The Searchers and their quest will continue through blistering desert heat, driving rain and deep snow. They will encounter so much bloody violence that Joe gives Cormac McCarthy’s Blood Meridian a run for its money for gallons of claret spilt. And, as always with Joe’s books, villains reveal themselves to complex individuals, the heroes of their own stories, and our heroes will make choices that are questionable at best.

Joe has clearly been watching a lot of Deadwood, a lot of classic Spaghetti Westerns, a lot of Eastwood, and he’s been reading a lot of Elmore Leonard’s Western stories. This could have been a mess and, if you read Joe’s blog, you’ll know that this has been hard work for him. But it’s a terrific read, a picaresque journey through a dying wasteland and a world about to change. The action is intense, but you never get lost in the mayhem, the story is complex, but it’s a joy to read, and the ending will leave you wanting more.

Saddle-up and enjoy the ride.