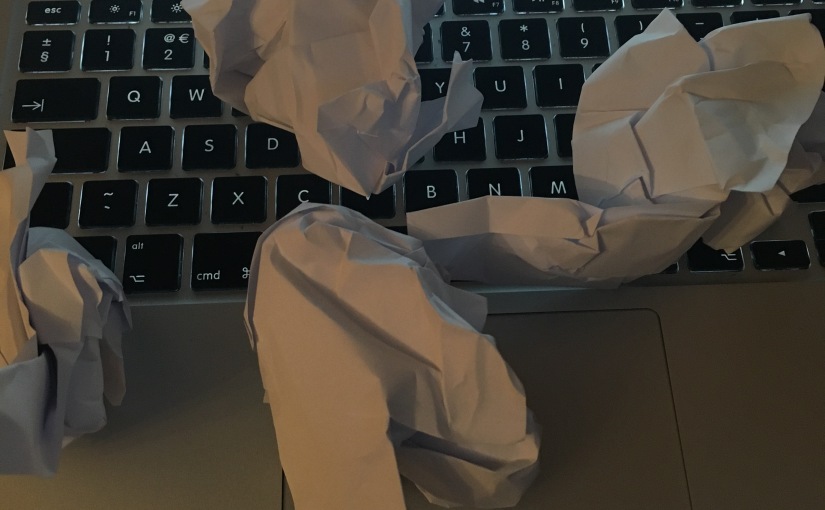 Up till Tuesday night this week, I was invincible.

I had spent the weekend polishing a TV spec script that was going to be my calling card. It was, without a doubt, the best thing I had ever written. I had spent maybe a year and bit slowly bringing it to life, researching the historical background, building the characters and the world, and it had already been through two beta-readers, who had given me excellent notes and were very positive, and it was ready to go out.

But I wanted one more opinion before I did that, just to be sure, and so I sent it to another writer friend for his opinion.

His notes were like a punch to the gut.

He found problems with the protagonist, the tone, the antagonists, and the ending.

And the worst thing is, he was right.

This is where my old friend self-doubt made an appearance. How could I have been so blind to the script’s flaws? Worse still, how could I have been so supremely confident that it was ready, when it clearly wasn’t even close? I’ve been doing this for long enough that I should know this, surely? I really did not know if I had the judgement to continue with writing. If I couldn’t see my own flaws, then how could I even possibly think about a career as a writer? I was useless. Hopeless. Worthless.

The notes arrived via email late at night, and I barely slept after that, constantly turning dead-end rewrite ideas over in my head.

By the morning, however, almost all of that doubt had gone. I had formulated some ideas for a rewrite and this time it was going to be awesome.

I’m hoping that this sequence of events is familiar to other writers.

I’ve gone through various incarnations of it ever since I started writing at school. I spoke about this on the podcast recently, noting that coping with tough feedback can be a bit like going through the stages of grief. Not to denigrate the overwhelming intensity of losing a loved one, but we writers can be melodramatic, and it cannot be denied that the similarities are pretty remarkable:

Then anger: Fuck ’em!  Look at these shitty notes: he contradicts himself three times, so why should I listen to him?

Bargaining: Maybe I should email them, pointing out the stuff they missed, which will help them see just how brilliant the story really is?

Depression: I’m utterly worthless, a total fraud and I should never put pen to paper ever again.

Acceptance: Ah, y’know what? Maybe they had a point? Let’s get to work.

Earlier that evening I had been messaging a writer friend who was going through the same thing, and I think that’s possibly what exacerbated things this time for me. I was telling my friend to keep his chin-up, you’ll get through this, you’ve been published, people love your books, you’re awesome… And all the while I was thinking how lucky I was to have put those days behind me.

What a doofus I was.

It never goes away.

I think good writers are able to hold conflicting thoughts in their heads. It’s the only way you can have characters with opposing views convincingly have at each other on the page. The trouble with this skill is you can be all too empathetic when people criticise your work. My inclination is to immediately agree with them; yeah, you’re right, it’s crap isn’t it?

I looked back at the notes that my friend had sent me. There was so much positive stuff in there. He loved the pace, the characters (mostly), the period, the maguffin, he said it was huge fun, unusual and really visual. Why was I only seeing this now? My eyes had somehow glazed over this and chose to focus on the shit.

I’m not posting this for ‘Aw, hun’ hugs, I just want other writers to know that if you’re going through this rollercoaster, you’re not alone.

And once you start to recognise the stages, it becomes easier to manage them, move through them more rapidly, find yourself working on solutions, and thanking your lucky stars that someone cared enough to help you make your work better.

So here I go with another rewrite. And this time, it really will be the dog’s bollocks.

Hope this wasn’t too depressing. Normal service will resume shortly. But if you think you know a writer/creative who might benefit from this post, then please do share… or give them a hug… or tea and biscuits usually does the job!