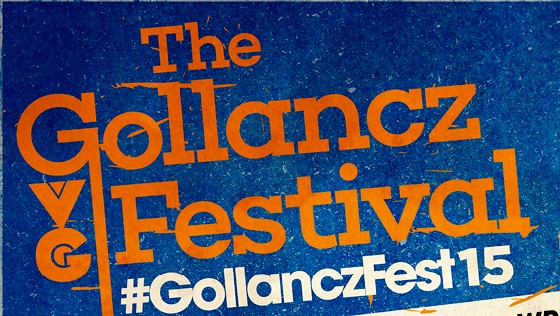 **STOP PRESS: LONDON AND MANCHESTER HAVE SOLD OUT, BUT THERE ARE STILL TICKETS AVAILABLE FOR THE WRITERS’ DAY ON SUNDAY 18TH**

This is going to be awesome, with an amazing line-up of authors including Joe Hill, Joe Abercrombie, Brandon Sanderson, Joanne Harris, Ben Aaronovitch and Sarah Pinborough, spread over four days starting Manchester and ending in London.

I’m in the CLASS OF 2015 bit with Aliette De Bodard, Alex Lamb, Al Robertson and Tom Toner and it should be great fun…

This has officially sold out, but if you’re a lucky ticket holder, then I’ll be in the Class of 2015 bit again, with a slightly different, but no less awesome, line-up:  Antonia Honeywell, Alex Lamb, Al Robertson, Tom Toner and Catriona Ward…

This has just been added so grab your tickets now! If you’re a writer, this day is gold dust. If I weren’t already going, I’d be first in line for tickets. Top writers and agents (and, er me!) talking about their craft. Unmissable…

Friday and Sunday, Prince Charles Cinema screenings of Minority Report and The Prestige.

And after all that, why not kick back enjoy a couple of classic movies with introductions from Pat Cadigan and Joe Hill? 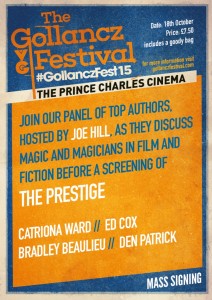 Really hope to see you there. It’s going to be a blast.

A version of this first appeared over at the Gollancz Blog.

I was delighted to hear that classic game ELITE was making a comeback this year, and even more delighted when I learned that Gollancz would be publishing a trio of tie-in novels. But what is thing you call ELITE, you cry? You mean you don’t know?!

Well, I had a similar reaction from some of m’learned (or not) sales colleagues at Orion Publishing, so I put together the following to help them sell it in…

It has come to my attention that some of you are struggling to get your heads around the Elite books, so here’s a quick guide for you norms…

Elite was a space trading game launched in 1984. The player could pootle around the universe, going from space station to space station, buying and selling goods. Of course, after a while this got boring and the player would be tempted to sell weapons and narcotics to make more money to buy cool stuff like docking computers (docking was really bloody hard), but this would usually get you blown up by the space fuzz.

It was massively addictive, and I, like many others my age, spent hours hunched over my BBC B computer staring at simple graphics like this…

Well, of course, nothing stays dead forever these days and now Elite is coming back. Only now it looks like this (click to enlarge for the full cor blimey experience)…

The new game has been brought to life via Kickstarter – that is, paid for by fans who will get first dibs at the game.Gollancz saw this and, as part of the Kickstarter, bought the rights to the books. The books are all set in the Elite universe and are quite different:

Elite: Wanted by Gavin Smith and Stephen Deas (writing together as Gavin Deas) is the action-packed one:

Elite: Nemorensis by Simon Spurrier is the sexy, violent one:

Elite: Docking is difficult by Gideon Defoe is the funny one:

The current plan is to release the eBooks on 15th May and the three HBs on October 16th.

I hope this all helps and let me know if you need any further info.