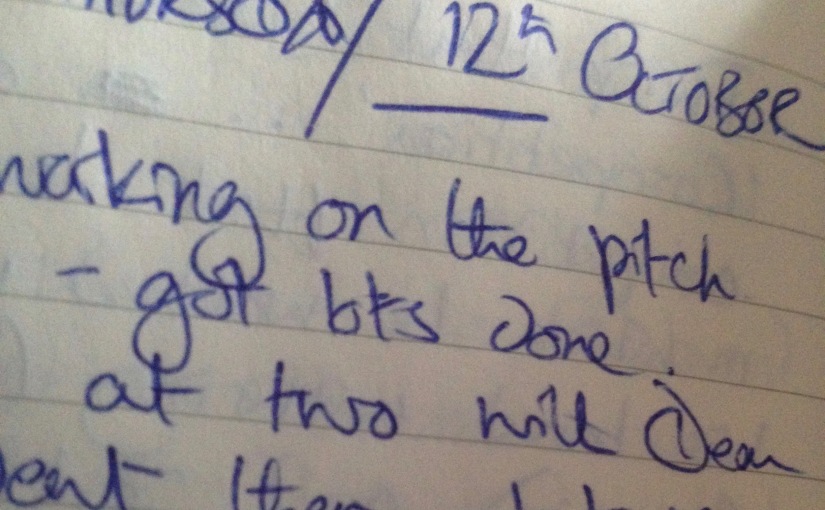 Ten years ago, my script Waiting For Eddie had a producer, a director and had been chosen for the first ever Film London Microwave scheme, which was designed to produce at least two debut films with a budget of £100k.

After three days of intense workshopping (see previous blog entries), we were given a day away to prepare our pitches for the real thing on Friday…

A blissful day at home working on the pitch and the script for Eddie. Got lots done. Had a conference call with Dean and Jon. I was confident then, but nerves are starting already.

Dean, Jon and I pitched to Film London this morning. As pitches go, it was textbook stuff and we covered everything. However, Dean called a little after to nine to say that we didn’t get the green light. No reason was offered and he didn’t ask. The positive spin is that we can now go and raise a proper budget instead rather than be constrained by the strict £100k that Film London insisted on. Dean’s right: at least this way we get to make it on our terms. Still, I can’t help but feel really disappointed. The green light from Film London could have meant that the film would be in cinemas next year and would have got us all some quick recognition.

Dean also reminded me that Film London’s remit is to support independent/arthouse film, and our script is very much mainstream and commercial and much more likely to get funding elsewhere than some of the other projects on the Microwave scheme. There’s no news yet on who actually did get through. Apparently an announcement will be made in the next ten days.

Aah, can you hear it? The post-disappointment rationalisation? There is some truth in our reasoning: the script is a ghost story, with a far more substantial VFX budget than any other script on the scheme (a habit I can’t seem to shake!), and it would have been nigh-on impossible to make effectively on such a small budget. All that fluff about arthouse versus commercial is balls, though. Looking back at my script ten years on, it’s far too idiosyncratic to be commercial, and the films that were selected by Film London were both eminently marketable and, while not runaway box offices successes, earned their money back, were highly acclaimed, and successfully launched careers.

The first I saw was Eran Creevy’s Shifty, which is a fantastic debut with terrific performances from Riz Ahmed and Daniel Mays. The second was Mum and Dad, a nicely twisted horror directed by Steven Shiel.

We eventually learned that we were ultimately rejected because my script was “too TV”, which burned at the time (and felt a bit of a flannely excuse), though now it’s got my cogs whirring and wondering if there’s mileage in a London-set TV series about a haunted house and guy called Eddie trying to figure out who murdered him. TV execs: you know where to find me!

I started keeping a diary ten years ago this month! It was partly to help me sleep at nights (I had a theory that putting the day’s events on paper would help… which it does… a bit) and partly to keep track of writing projects I’d submitted.

I mention two projects. A play called BAN THIS FILTH! which I had staged at my local theatre and thought I could adapt for radio, and a children’s book called MORRIS MINOR AND THE ABOMINABLE CHALET OF DOOM.

This was at an exciting but uncertain time for me. I had two agents – one for books, one for scripts – but was still struggling to figure out what kind of writer I was (something I’m still trying to work out, to be honest), hence the identity crisis.

There’s some light editing here, and some names have been changed or redacted to protect the innocent.

Two – count ’em – two! rejection letters in the post this morning. The first was for a pitch I sent to BBC radio for ‘Ban This Filth’. Fair enough. I only have the fuzziest memory of sending the pitch, so I’m not too fussed about that one (although… the shite they have on the radio sometimes…).

The second one was the real gutter. <A MAJOR PUBLISHER> said no to ‘Morris’. It was a pleasant enough rejection (‘We liked it… however…’ – I’m going to put those words on my bloody gravestone) but my agent is comparing me to Jeremy Strong (too young!) so anyone reading it is prepped for a completely different kind of book. Mind you, the rejecting editor did use words like ‘crazy’ and ‘zanier’ (is that even a word?), so I reckon I’ve had a lucky escape.

I’m not entirely sure my agent likes me, either… the rejection letter was forwarded with a blank compliment slip… No ‘Chin up… there’s plenty more fish in the sea!’ Nothing. It’s almost like an ‘I told you so’ from them. Someone needs to work on their people skills.

Ah, rejection. I like to think I cope with it a little better these days. For me, there are four stages to rejection: furious anger, blind denial, dismal depression, then a calm acceptance. I try to skip straight to the final stage if possible.

Needless to say, I’m no longer with that agent (stay tuned for the diary entry when they drop me!). And, despite my bitter accusatory tone, it’s not a fault of theirs that it wasn’t working. We were just wrong for each other. They had a fixed idea of what kind of writer I was, and I didn’t have the first clue. No wonder there was a clash. Finding your voice is one of the most important things for a writer. I clearly had some way to go…